RIM 26(3): Abundance, composition and distribution of marine debris on the bottoms of the Basque coastal shelf 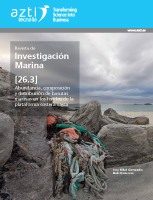 Contenido: Between 2010 and 2013 some annual surveys were carried out within Itsasteka project aiming to collect information about sedimentological and faunistic composition of the marine bottom in front of the Basque coast. This information is considered relevant in the context of the European Marine Strategy Framework Directive. One of the main objectives was to know the demersal ichthyological fauna (related to descriptors 1, 2, 3, 4 and 6 in the mentioned Directive), and bottom trawling was used to obtain samples. In addition to fishes and invertebrates, marine litter (descriptor 10) was also collected. The litter from 2011-2013 surveys was quantified and analysed. Samplings were carried out in 29 transects at depths between 25 and 358 m. Between 0,22 and 0,41 km2 were trawled in each sampling, resulting a total sampled surface of 6,75 km2 in 2011, 8,18 km2 in 2012 and 8,22 km2 in 2013. The highest amounts of litter were collected in front of Pasaia, Donostia and Deba. The main litter typology corresponded, by weight, to the category  “others” (rubber, slag, wellies, sponge-mattress, bucket, tyre, wood pieces, etc.), “fishing equipment” and “clothing/leather”; whereas by number of items, in addition to “others” and “fishing equipment”, “plastics” were also present with high values.