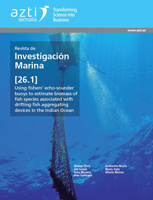 Content: The majority of the drifting fish aggregating devices (DFADs) used by the industrial tropical tuna purse seine fishery are deployed with satellite linked echo-sounder buoys. These buoys provide information on the accurate geo-location of the floating object and estimates of fish biomass underneath the DFAD. However, current echo-sounder buoys do not provide information on species or size composition under the DFADs. The aim of this study is to progress towards improved remote biomass estimates using the previous models proposed in the field, based on existing knowledge of the vertical distribution of non-tuna and tuna species at DFADs and mixed species target strengths (TS) and weights. Aiming to this objective, we use 287 fishing set information and their corresponding acoustic samples from echo-sounder buoys prior to the fishing set in the Indian Ocean. Results show that manufacturer’s biomass estimates generally improve, being this improvement more pronounced in NW Seychelles and in Mozambique Channel. However, the improvement of the biomass estimates is not as large as expected, so it can be further improved, indicating that the large spatio-temporal variability in the Indian Ocean is not easily considered with a single model. Potential reasons driving echo-sounder buoy estimates variability, as well as the limitations encountered with these devices are discussed, including the lack of consistent TS values for tropical tunas, among others.