RIM 25(1): Procedure to assess and quantify the ingestion of plastics by the Common Guillemot (Uria aalge) 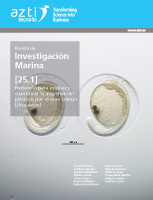 Content: Plastic litter content in stomachs of seabirds, like the Northern Fulmar (Fulmarus glacialis), is being used as indicator of changes in levels of litter in environmental monitoring programs of the North Sea. Furthermore, one of the Ecological Quality Objectives for the North Sea (EcoQOs) adopted by the Oslo- Paris Convention (OSPAR) is based on the presence of plastics in the stomachs of the abovementioned species. However, the Norther Fulmar is scarce in the SE Bay of Biscay and, hence, another biomonitor species should be considered for this area. The Common Guillemot (Uria aalge) is proposed as alternative species. This manual describes a standardized methodology for the collection of common guillemots as well as for the necropsy and the subsequent ingested plastic characterization and quantification. Thus, this protocol will enable to obtain standardized data to develop EcoQO in the Common Guillemot in the SE Bay of Biscay and to contribute in the assessment of the environmental status of this region of the Atlantic Ocean, which is of special interest in the context of the European Marine Strategy Framework Directive.