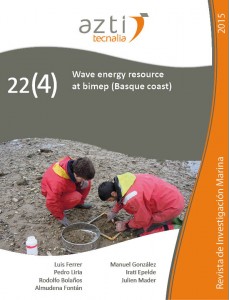 Content: The Biscay marine energy platform (bimep) is a demonstration infrastructure to test wave energy converters in real conditions, which is located near the coast of the southeastern Bay of Biscay (study area). Hourly wind fields obtained with two meteorological models (MM5 and WRF) and three-hourly directional wave spectra provided by WAVEWATCH III were used to feed the WAM model and simulate the wave climate from 2007 to 2010 in the study area. The MM5 and WRF models were able to reproduce the time evolution of the offshore winds with a reasonable accuracy. A mean value of r2 > 0.6 was obtained in the comparisons carried out between the predicted and measured data. However, the results suggest that a meteorological model with a higher horizontal resolution would be more appropriate to estimate the wind field close to the coastline. The significant wave height, Hs, and the mean period, Tm02, were the wave parameters obtained with WAM that showed a statistically better agreement with the observations in deep and intermediate waters. Here the mean values of r2 were ~0.9 and 0.7 for Hs and Tm02, respectively. At the entrance to Pasaia Harbor, r2 for Hs was slightly lower, with a value of ~0.8. At the metocean station located in the bimep area, the WAM predictions showed that the annual wave power increased from 221 to 268 MW·h·m-1 in 2007‒2009, decreasing to 158 MW·h·m-1 in 2010. Both the wave energy resource and Hs obtained with WAM did not show any clear correlation with the NAO index, while the wave periods (especially Tm02) were positively correlated with this index during Winter.