RIM 22(3): Cancer pagurus fishery with creels in the Basque Country: catches, biological characterization, catches per unit of effort and its habitat distribution modelling 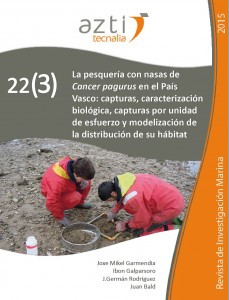 Content: The edible crab (Cancer pagurus) fishery off the coast of the Basque Country exists since many years ago. However, it is not available a complete information about catches or other details of their activity. In order to fill this lack of information, a collaborative work with some vessels engaged in fishing of edible crab began in 2013: port sampling were done in order to carry out the biological characterization of the catch (sex, size and weight of the captured specimens) and diaries were distributed to record catches of each working day (number of creel used, number of individuals captured and total catch weight). Based on the information obtained in 2013 and 2014, 73% of the catch corresponded to female individuals and 27% to male individuals; the average individual weight was 903 g; both sexes follow different growth pattern; males dominated among the small size individuals; the average catch per unit of effort (CPUE) was 53.3 kg/100 creels (s.d. 33.0 kg/100 creels); the creels were in the sea mostly between 2 and 5 days; 99% of the catch exceeded the required minimum legal size (130 mm of carapace width); and it was not observed any downward trend of CPUE, which reflects the good state of the resource, at least in this fishing ground and the considered fishing pressure. Finally, a habitat model was applied by an statistical analysis of the catches and their depth distribution, as a result, maps of those suitable zones for the presence of edible crab were obtained.