RIM 21(2): Tuning of protocols and marker selection to evaluate the diversity of zooplankton using metabarcoding 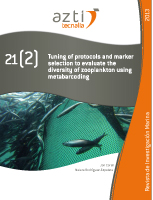 Content: DNA metabarcoding consists on taxonomic assignment of individuals from an environmental sample based on their DNA sequences. In recent years, this technique has enormously evolved due to the increasing effort in surveys and to the advent of new sequencing technologies. The success of the metabarcoding method largely depends on the efficiency of the protocol for extracting DNA from complex samples and on the genetic marker and primer pairs used for taxonomic identification. Here, we have experimentally evaluated alternative protocols for DNA extraction from zooplankton complex samples, and have theoretically tested the suitability of previously published primer pairs for barcoding of zooplankton. The experimental analyses show that the SDS-chloroform method is the most suitable for extracting DNA from mixed zooplankton samples. Additionally, the in silico analyses show that no primer pair is sufficient to amplify one of the most commonly used markers for barcoding, the gene codifying for the cytochrome c oxidase subunit I (COI), but that there are a set of primers that seem to capture the whole zooplankton diversity based on the small subunit ribosomal RNA (18S rRNA) gene. Our results have implications for future zooplankton metabarcoding projects, for which a prior knowledge of the best DNA extraction method and best performing primers is necessary.