RIM 20(7): Operational protocol for the sighting and tracking of the cnidarian Physalia physalis (Portuguese man-of-war) in the southeastern Bay of Biscay 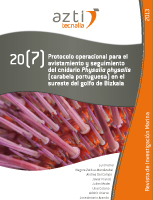 Content:  Physalia physalis, commonly known as the Portuguese man-of-war, is a colonial organism (cnidarian), greatly feared for the severity of its stings, that consists of a gas-filled sail-like float on top and a suspended part formed by specialized polyps and long defending and hunting tentacles. This paper describes the operational protocol established during the summer in the southeastern Bay of Biscay (and especially along the Basque Country coast) for its sighting and tracking. This action protocol combines the cooperation among several civil society stakeholders, including fishermen (from Spain and France), with the results of ocean and atmosphere circulation models. In this case, hourly sea surface currents and winds obtained with the ROMS (Regional Ocean Modeling System) and WRF (Weather Research and Forecasting) models, respectively, are used in a Lagrangian particle-tracking model to estimate the drifting of Portuguese men-of-war and their impact on the most popular beaches of the Basque Country.